Charles Andrew Bothwell (born December 13, 1981), better known by his stage name Astronautalis, is an American alternative hip hop artist currently based in Minneapolis, Minnesota. Contents 1 History, 2 Style, 3 Discography 3.1 Albums, 3.2 EPs, 3.3 Singles, 3.4 Mixtapes, 3.5 Guest appearances, 3.6 Production credits, , 4 References, 5 External links, History: After gaining some recognition in local circles in Jacksonville, Florida and competing at Scribble Jam, Astronautalis self-released his debut album, You and Yer Good Ideas, in 2003. He eventually signed with Fighting Records and the record was re-released in 2005, followed by his second album, The Mighty Ocean and Nine Dark Theaters, in 2006. He released the third album, Pomegranate, on Eyeball Records in 2008. In winter 2009, he toured with the Canadian indie rock band Tegan and Sara through Europe, and supported them again through the spring of 2010 in Australia. His fourth album, This Is Our Science, was released on Fake Four Inc. in 2011. Style: Astronautalis has been described as “if Beck were a decade or so younger and had grown up more heavily immersed in hip-hop,” with his rapping style noted for “blending styles of indie rock, electro, and talkin’ blues” with hip-hop. He has described himself as “historical fiction hip-hop.” During live performances, he often performs a freestyle rap based on topics chosen by members of his audience. Wikipedia®.

P.O.S and Astronautalis have joined forces to form FOUR FISTS. Doomtree Records proudly presents their debut release: a limited-edition 7-inch featuring two new songs, “Please Go” and “MMMMMHMMMMM,” and the instrumental version of each. Astronautalis is part emcee, part method actor, with an uncanny ability to channel characters on the edge—of a breakdown, of a revelation, of a fistfight. P.O.S (Rhymesayers/Doomtree) made his name as a gifted risk-taker, fashioning head-nodding beats from strange noises, and writing anthemic lyrics from unexpected vantage points. These first two tracks from FOUR FISTS were produced collaboratively by the duo, holed up in P.O.S’ attic during an exceptionally brutal Minnesota winter. In these songs, listeners will hear the rappers’ usual sharpness and a nod to traditional notions of hip-hop collaborations, but their noir approach yields an entirely new sound: dark choral layers and punk rock gang vocals create a sense of impending doom. “Please Go” is a haunting number that runs on thick, brooding bass; it’s shaped by a frayed synth, whispered vocal takes, and soaring strings that sweep in and out of the darkness like cars passing in the distance. “MMMMMHMMMMM” opens with quick snares, in the sharp staccato stabs of an Underwood typewriter, and a bass synth that pulses like an idling outboard motor, till the track explodes into a wall of layered drums and throat-shredding vocals—P.O.S and Astronautalis at their most deadly. The two songs clock in under 8 minutes and still hit like a ton of bricks, leaving you dizzy, breathless, and eager for this duo’s coming full length album. 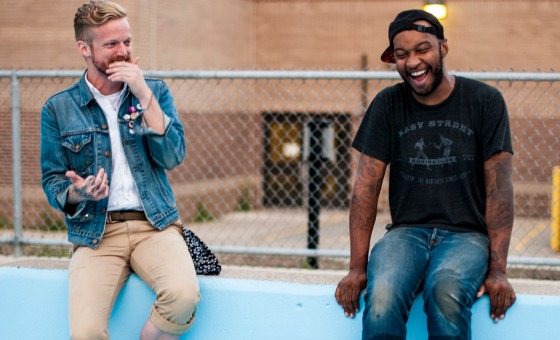