Fat White Family are the greatest young rock band in the UK and this probably extends to the rest of the world as well. What’s that? You want to know more? Christ on callipers, ok, let’s see what we’ve got here then. It won’t come as news to anyone who has been to one of their regular Slide-In nights at their local pub and HQ, The Queens Head in Brixton, South London but for a band that only really coalesced as the Fat White Family in 2011, the six piece have already got several once-in-a-lifetime/ ‘OMG – were you there?’ gigs under their belt. On December 10th 2013 they rattled the walls of the legendary 100 Club, thus aligning themselves with the numerous legends who have trod the very same stage. The band summoned up the feral electric skronk blues of The Magic Band and The Birthday Party, the proto-punk pummelling of The Monks and The Modern Lovers and the twisted folk of Charles Manson and The Country Teasers. And as singer Lias Saoudi, clad in nothing but a pair of back to front, skin tight rubber trousers, was carried at head height off stage by a crowd of howling devotees, it was clear that something special had just happened. 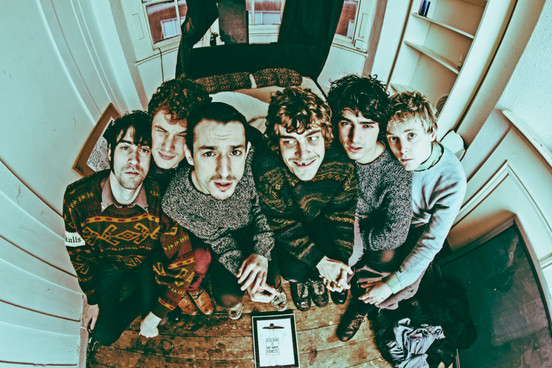