The Copenhagen-based production duo Farveblind have teamed up with the legendary producer Steve Dub to curate a blistering fusion of Danish electronica and UK rap in the form of ‘Jewels’, the first single from their debut EP. ‘Jewels’ is a love letter to the untamable youth of the 90s and is vehemently non-conformist in its musical approach. Whilst capturing the slick pop sensibility of Scandinavian electronica and the hard and gritty essence of the British underground dance scene, the track introduces the most exciting sounds from the South East London grime movement with Paul Stephan’s rich lyrical flow. Blaring sirens and heavy bass are all part of a cinematic picture painted with a pallet filled with the fieriest shades of techno, rave and rap. 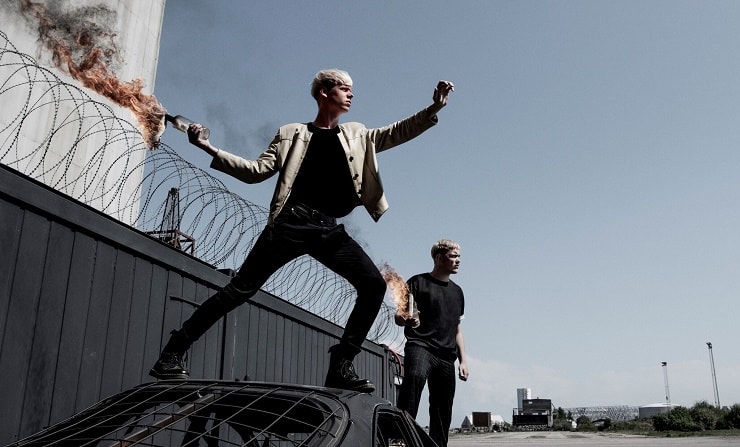 Farveblind’s Magnus Pilgaard Grønnebæk talks about their artistic direction: “With ‘Jewels’ we’ve channeled all our inspirations, desires and emotions into an explosive, groundbreaking, un-compromised, gong-ho I-don’t-give-a-f***-sound – marking a new paradigm in the world of Farveblind.” Jens Asger Lykkeboe Mouritzen continues… “We flew Paul in from London for a three-day-session and partied hard for all of it. We knew about his unique voice and amazing flow but now we know he also has the personality to match!” Farveblind have also created a cleverly dynamic video to capture the unpredictability of ‘Jewels’. Despite almost being arrested for armed robbery during filming due to a notifying mix-up, the video is ferociously antagonistic throughout. Producer Aleksander Hørup Gislason states “I immediately tapped into my own teen life in the outback of Denmark. We were brought up on MTV, boredom and Bacardi breezers. It’s those short moments of immortality I wanted to capture in the video.”

To then bring three-time Grammy award-winning producer Steve Dub into the mix is a statement of serious intent. His outstanding career has seen him work on records for The Chemical Brothers, The Prodigy, Underworld, New Order and Roots Manuva, whilst achieving six UK No.1 albums and ten million record sales worldwide. In every way, Dub is a perfect fit for the duo’s club and radio-ready sound. Farveblind find their energy from forming real life bonds with disparate artists and believe in transmitting these vibes from the studio to the listener. Having started with the Australian pop singer Clea and continued with the smooth soul of South African artist Khaya N9, they now find themselves in the streets of London, and on the brink of unleashing a monstrous debut EP with Steve Dub and Paul Stephan.