Far Cry 4 Trainer. Far Cry 4 is an action-adventure first-person shooter video game developed by Ubisoft Montreal and published by Ubisoft for the PlayStation 3, PlayStation 4, Xbox 360 and Xbox One video game consoles, and Microsoft Windows. The sequel to the 2012 video game Far Cry 3, it is the fourth installment in the Far Cry series. The single-player story follows Ajay Ghale, an English-speaking Nepalese native who returns to Kyrat, a wild and untamed region of the Himalayas to scatter his mother’s ashes. Once there, he becomes caught up in a civil war as the people struggle under the despotic regime of self-appointed king Pagan Min (Troy Baker), ruling under an oppressive monarchy. Far Cry 4 marks the first time in the Far Cry series that the main characters are natives to the country in which the game takes place. Far Cry 4‘s narrative director Mark Thompson expressed that he wanted the narrative of the game to correct shortcomings he felt the previous game Far Cry 3 had. Wikipedia®.

With Far Cry 4, you will find yourself in Kyrat, a breathtaking, perilous and wild region of the Himalayas struggling under the regime of a despotic self-appointed king, Pagan Min. With terrain spanning from lush forests to the snowcapped Himalayas, the entire world is alive…and deadly. From leopards, rhinos, black eagles, and vicious honey badgers, Kyrat is home to abundant wildlife. As you embark on your hunt for resources, know that something may be hunting you… Scout enemy territory from above in the all-new gyrocopter and then plummet back to earth in your wing suit. Climb aboard the back of a six-ton elephant and unleash its raw power on your enemies. Choose the right weapon for the job, no matter how insane or unpredictable that job might be. With a diverse arsenal, you’ll be prepared for anything. 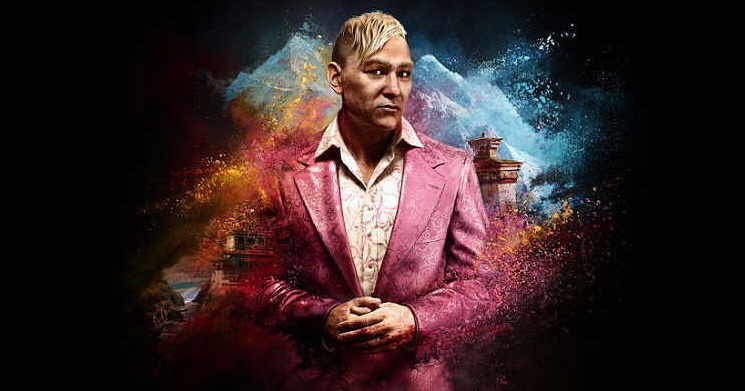