When Escapists’ vocalist Simon Glancy moved to London to concentrate on his songwriting, he asked the only musical friend he knew to help record his ideas. Enter Oli Court, future Escapists guitarist. Oli drafted in his friend, composer Max Perryment, to play bass and the trio spent a week of intensive sessions finalising Glancy’s ideas before deciding their musical camaraderie was worth pursuing. Oli’s former schoolmate Andy Walsh was enlisted to round off the lineup on drums and before long they were recording indie rock inspired by Simon and Oli’s university listening habits: Arcade Fire, The National and Broken Social Scene. Escapists’ debut single was picked up and broadcast by XFM’s John Kennedy and within the year they toured with Imagine Dragons and made their festival debut at Reading and Leeds. 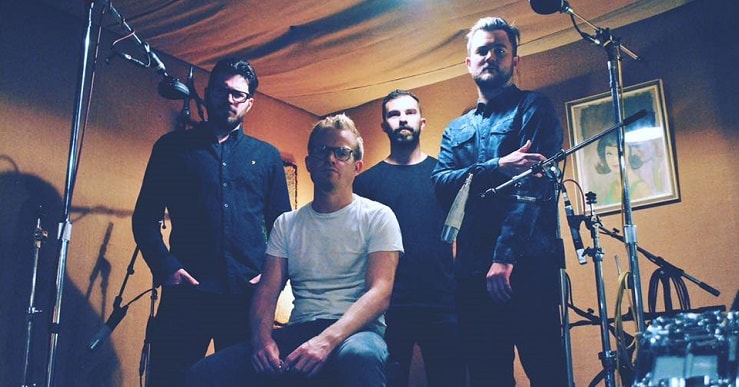 Their debut album ‘Only Bodies’ was written in the first half of 2013 and released in 2014 to general appraisal from the blogosphere. Towards the end of last year they followed it up with the standalone single ‘Faraday Cage’, packaged with a striking update of the Talking Heads classic ‘This Must Be The Place’ – it was a fitting homage to a band who, like Escapists, were bent on pushing the parameters of new wave. After releasing the all-killer five track EP ‘Eat You Alive’ last year, Escapists shed their jagged post punk skins, went back to the drawing board and re-emerged with their new AA single ‘Silence/Animals’. Ostensibly it’s Escapists at their most pop: the melodies are immediate and the structures are exhilarating. The truth is, like the bands that brought them together, they’re now making pop music for the thinking person. This year sees Escapists arrive at their most thought-provoking work yet: ‘Silence/Animals’ is the sound of bigger things still to come.

Loaded with huge atmospherics, emotive harmonised falsetto lines and a motley assortment of guitar tones, ‘Animals’ is a thrillingly mature turn for the group. It manages to be their most life-affirming song yet. Initially composed by bassist Max Perryment and sent to vocalist Simon Glancy while the latter was sat in a hospital waiting room, lyrics emerged after Simon tried to imagine backstories for the people around him. The vocal is penetrating, both lyrically and technically, as Perryment’s cunning accompaniment bends and mutates around Glancy to set up a blissfully smooth and interesting outro.