Skip to content
Home » Music » Eat The Evidence: Fruit Of The Loot

A breathtakingly entertaining hybrid of The Specials, NOFX, Ween and The Streets, Eat The Evidence are led by brothers Jack and Tom Lattimer, skilled musicians whose deceptively dextrous playing demands equivalent levels of expertise from fellow band members Ric Lygo, Joe Bartlett and Michael Saminaden. With an earthy, animated and uninhibited stage presence, the band’s live shows are swiftly becoming London legend, riotous gigs of carnivalesque proportions with not a little audience interaction. Exploding onto the ska-punk and festival circuits in 2014, Eat The Evidence are always the punkest band on a reggae bill, or the reggae’est band on a punk night. Either way, they will always own the room. 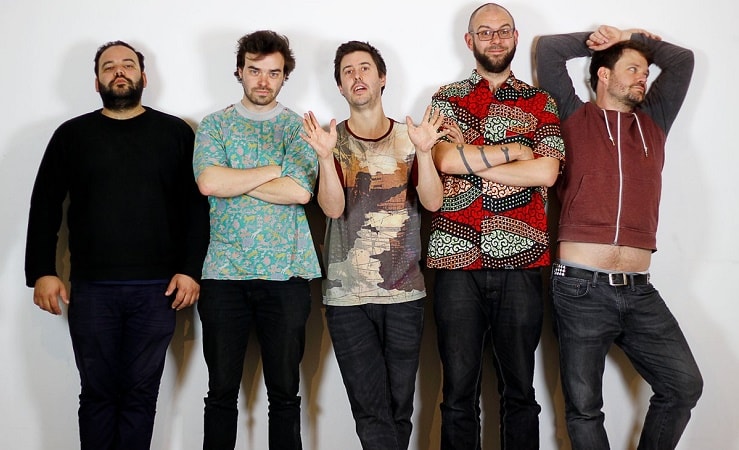 Capturing such visceral energy on tape could have been a challenge, but with the help of Sam Duckworth (aka Get Cape Wear Cape Fly), Jay Malhotra and Rees Broomfield, Eat The Evidence emerged from The Broom Cupboard in Southend-on-Sea brandishing their debut album, ‘Sex, Drugs & Wishy Washy Politics’, which surges from the speakers in a flood of sonic sweat. Eschewing romantic escapism for the distinctly down-to-earth, the album’s subject matter ranges from junkie girlfriends to the post-party comedown to political and existential conundrums, all delivered with biting satirical lyrics, breakneck rhythms and such a liberal approach to instrumentation that accordion, trumpet, ukelele and even slide whistle are thrown into the bass-guitar-drums mix. There’s no pretence, no heeding of passing trends, just the foul-mouthed rejection of societal flaws and a riotous celebration of the good times.

Eat The Evidence: Fruit Of The Loot

“This song is about how other countries can’t be trusted at looking after their own belongings. What better way to express this than using a slide whistle and swear words.” Eat The Evidence.

A satirical account of the artistic trappings of the British Empire set to supercharged-ska, ‘Fruit Of The Loot’ is a tongue-in-cheek yet brutally honest address to all those nations, from Greece to Chile and beyond, whose prized cultural artefacts have been pilfered for exhibits in UK museums and galleries.

It’s all set to an astonishingly agile brew of agit-ska – all dubby bass, fiesta beats and, yes, that is a slide-whistle solo. The video captures the band dressed as colonialists, visiting the stolen artefacts at the British Museum.

Eat The Evidence: Fruit Of The Loot Lyrics: