Dawes is an American folk-rock band from Los Angeles, California. Dawes is composed of brothers Taylor (guitars and vocals) and Griffin Goldsmith (drums), along with Wylie Gelber (bass) and Tay Strathairn (keyboards). Dawes was formed from the band Simon Dawes after the departure of co-songwriter Blake Mills, subsequently abandoning a post-punk sound in favor of folk rock. Dawes has been described as having a Laurel Canyon sound derived from artists such as Crosby, Stills, and Nash, Joni Mitchell and Neil Young. At the invitation of producer Jonathan Wilson, the band joined a local informal jam session that included Conor Oberst, The Black Crowes’s Chris Robinson, and Benmont Tench. The band recorded their debut album, North Hills, in Laurel Canyon in a live setting to analog tape, resulting in a sound that Rolling Stone magazine called “authentically vintage”. Wilco multi-instrumentalist Pat Sansone is also credited with appearing on the release. Original keyboardist Alex Casnoff left the band in late 2010, and was replaced by Tay Strathairn. The band made their television debut on The Late Late Show with Craig Ferguson on April 14, 2010. Dawes released their second album, Nothing Is Wrong, on June 7, 2011 and toured the US co-headlining with Blitzen Trapper. Dawes played alongside Jackson Browne at the Occupy Wall Street event in Liberty Park, on December 1, 2011. The band also appeared as themselves on the February 7 episode of the NBC television series Parenthood. In February 2013, the band released the single “From a Window Seat” from the 2013 album Stories Don’t End on Red General Catalog and Hub Records. Wikipedia®.

Dawes performs their song “Someone Will” for a Fuel/Friends Music Blog Chapel Session from Meadowgrass Music Festival in Black Forest, Colorado.

Dawes – Someone Will Lyrics:
Grab your cigarettes,
And follow me out of the living room.
And Ill get drunk enough to tell you how I feel
About the men you loved,
And how they all seemed to get the best of you
Because If I dont say these things, you know,
Someone will.

If that look in your eyes, as I slowly go through the evidence,
Gives any insight into the void you cant get filled
Then your heart it’s bigger than any Ive come up against.
And if nobody has loved you enough, I know now,
Someone will.

So I hope my voice can stay as clear as I need it to
But that my words take on the nature of a drill
To be set against the frozen sea inside of you
Because if I don’t tell you Im falling in love, then
Someone will.

Someone will, and maybe someday youll be listening.
But I could be just as you need me up until.
The kind of guy you say youre looking for,
Sounds like the kind of guy I want to be
But if you just want someone to hold you right now, then
Someone will.

Its the nights like this in the quieter parts of Los Angeles
When you think you see the outline of the beast, up in the hills.
Well you might be sitting beside the only person you could face it with
But if you dont want me after tonight,
Someone will.

I have to believe that
Someone will. 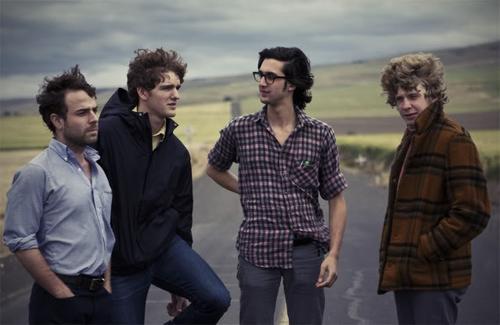