With his debut album, Every Colour, set for a summer release on Bombay Records, David Morin plays gigs around the world accompanied by a live band. Yet the humble neo-soul singer, songwriter and multi-instrumentalist still chooses to busk regularly on street corners in his hometown of Vancouver. After all, that’s where this 32-year old, who is of Metis Native American descent, honed his craft––and his social message. Like the man himself, David Morin’s music is pure, authentic and from the heart. Self-taught and passionately committed to being a career artist, he’s blessed with the ability to turn strangers into fans. That’s why he earned his stripes the hard way, busking on Vancouver streets and singing for his supper… literally. This guitar (and loop-pedal) virtuoso makes a solo performance sound like an entire band. “I do a lot of street performing,” he says. “It’s a good way for me to beef up my chops musically and try to get a crowd of people to listen when you’re kind of subjecting them to performance. It’s an interesting social experiment.”

Morin’s unique, feel-good fusion of soul, hip-hop and jazz has earned much critical acclaim. His riffs bring to mind the licks of blues and funk masters. Playful hints of disco and pop add retro ﬂavor to a contemporary pop aesthetic that’s as accessible as it is seductive. And that voice! Melodic; smooth as honey; reminiscent in sound and vibe to the likes of John Legend and D’Angelo. And now, an actual live band––seven musicians from St-Petersburg, Russia trained in classic soul, funk, and jazz––elevates his live show even more. Even Morin himself is amazed by the power these amazing musicians and vocalists (all friends of his) add to his compositions.

“It’s huge,” he says. “When we were in that rehearsal space I could just feel the energy, it’s so much different than just listening to a track. When everybody gets into the groove and it’s super tight and we’re all getting really comfortable; all that in the moment playing all at the same time––it’s just a huge energy.” Considering Morin’s joyful tenacity, it’s no surprise that a purpose, both social and spiritual, drives everything he does. His grooves might be smooth, yet his lyrics address protest: politics, justice, and thinking outside the box to inspire actual social change. Considering our turbulent social and political climate, his message is particularly relevant. And he practices that which he preaches; this guy cycles around on an electric bike pulling a cart of gear, and busks all day. 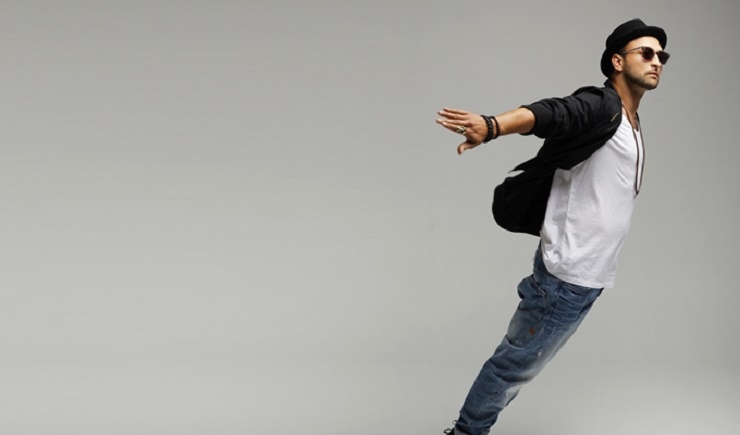 “I’ve got my philosophies in order,” he says. “I mean, I’m busking, I’m the antithesis of what society wants. I feel like I’m kind of an anarchist in the way that being an artist creates a different perspective on the world. You go through shit, you ﬁgure it out, you gain wisdom and experience and know how to do things better the next time.” While growing up in the rough Vancouver neighborhood of Surrey, David Morin loved singing (his mom was into R&B) and brought his guitar with him everywhere he went. In fourth grade, he was kicked out of class for singing. As a teenager, he joined a youth music program at church, invited by the pastor’s son, who was into “full-on hip-hop.” Morin thought, “This is the coolest youth group I’ve ever seen!” After jamming and making beats, he started a band. He was also fond of skipping class, not to smoke or cause a ruckus, but rather to sneak into his high school’s music room. It housed a KORG keyboard. For Morin, this synth was a revelation. “I soon discovered you could make beats, drum sounds keyboard sounds!” The hungry young prodigy would even go hang there after school, thanks to some music-appreciating janitors who let him in afterhours. While in some ways the culmination of years of preparation, Every Colour (produced by the award-winning Joby Baker) is really a beginning. Not only of a musical career, but also of an independent way of thinking and living that he hopes to share.