Diary – refuge, oasis for the soul, collecting basin for thoughts and memories of experiences we want to preserve. Diaries are patient listeners and often your only confidant. That’s how it is with diaries, and that’s how it is with Como’s diary. Como? „Just Como. That’s my nickname“ says the young Austrian – and: “Yes, it has something to do with this wonderful city in Italy. It’s so incredibly quiet and beautiful there, Lago di Como is definitely my place of self-discovery”. But there’s also this never frankly uttered speculation that her own life once started in this Lombard city… and her smile simply puts a stop to all further inconvenient questions. Como lives in Steiermark. Born in Graz, raised in the western part of the country, home of the white Lipizzan horses. Mining industry, glass art, nature – and hardly an hour’s drive to Italy. A three-women household in Bärnbach: Grandmother, mother, daughter and a tomcat, “although he didn’t stand the womanly dominated idyll for long. After one year he threw himself in front of a car – in the hardly trafficked 20 mph zone – it was just no life for a macho”, Como says with a smirk, “and for me, too, the small town became smaller and smaller. Single mothers are often a bit clingy, and I virtually had two of them.” With only 16 years of age, the young Como moves to the regional capital Graz, and into her first own apartment. 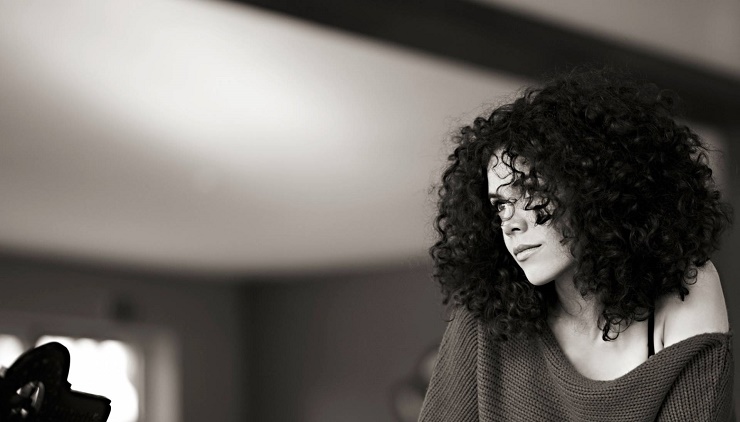 After finishing school she attends university: English, French, Italian, law, politics, economics. The young woman with the characteristic curly hair strictly creates and follows her path. It is her wish to change the world, to become an advocate of Greenpeace or an activist in politics to look after what really matters: taking care of our world. In doing so, her most important companion since childhood has always been her diary. Como’s diary has black and white keys. Music has always been a part of Como’s life. Grandpa was a composer, and as his granddaughter had inherited his musicality, great expectations had been placed on her. She was only four years old when she first stood on stage; in music school she felt rather constricted than creatively challenged. “Finally, at the age of 13, I refused to make music in front of other people”, she says. After that, she fled with her music into creative isolation. Songs originated at the piano, mostly late at night, when everybody else was asleep. Thoughts and experiences that needed to be dealt with became lyrical fragments which over all the years finally led to the creation of Como’s “Music Diary”. She says she doesn’t exactly write songs – they just happen. “I sit down at the piano and play whatever comes to my mind. This leads to a rough draft that still has to mature, until all of a sudden the gaps practically fill themselves” says Como, who till the present day has always kept her songs to herself as well-hidden entries in her diary. “None of my songs has ever been supposed to be published”, she says, her music had been her hard kept secret, “a hidden part of myself that I did not want to share with anybody”.

Como: Hallelujah Lyrics:
Hit the ground and cracked my bones,
it’s been a long fall down from heaven.
‘ sent me back on human tracks,
oh what a strange kind of prevention?!
I feel and bleed again,
but I can take the pain…

Oh hallelujah, I’m on my way home,
I’m just a God damn sinning fool you know,
so just enjoy the show!
Oh hallelujah, I guess paradise can wait,
I’m gonna turn this place up side down,
I think I like it here somehow…

Walk along the fallen road,
I got a real bad reputation.
Didn’t fit into the flock,
I give a damn about salvation.
They sing and prey each day,
– it’s everyday the same…
Oh hallelujah, I’m on my way home, …

Fallen angels walk the streets a thousand years and more,
I won’t give myself up to be innocent and pure,
call me sinful, call me demon, creature of the night,
good and bad is part of me, I really can’t deny.
Oh hallelujah, I’m on my way home, …