New Copenhagen-based duo Code Walk are set to release their debut single ‘Guess What’, a floating slow banger featuring the vocals of Norwegian producer duo Smerz; out on Code Walk’s own label F12 Records on 27th January. Early support from radio tastemakers has been flooding in from Phil Taggart, Lauren Laverne, Nemone, Julie Adenuga & Jamz Supernova and is now premiering online with Dummy. Written during a two week session together on a small island off the coast of Norway, this single sees the pair combine their trademark slick electronics with the stirring female vocals of Smerz, creating hypnotic moody vibes that tease the listener. The analog drum beat is complemented by the Smerz girls smoothly posing the question ‘Do you still feel sorry for me?’ playfully taunting the listener. The slow build up of the electronic instrumental rises with the hypnotic layers of repetition from the vocals, producing a trippy yet captivating sound. 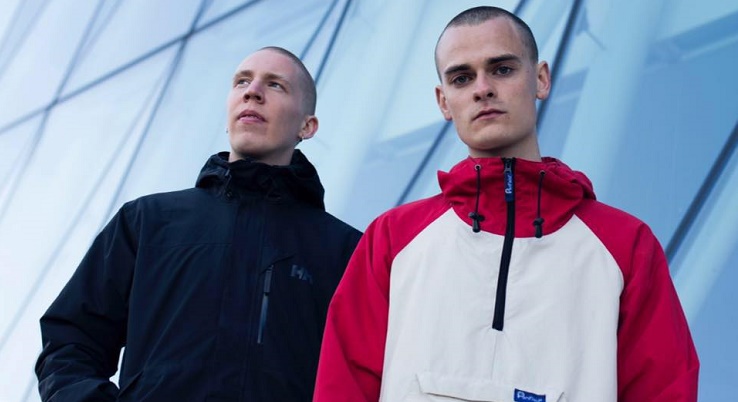 Speaking on the track, Jesper Nørbæk explains “Initially when ‘Guess What’ was still living on a drum machine what caught our ear was that we had programmed the drums to play a small kind of melody. It was something between a bassline and a beat, and after adding a few chords we arrived at a vibe we liked. Having this melodic yet sparse approach to rhythm gave it a certain attitude that we thought Smerz would be great for, so we laid down the main ideas and they took it from there. The girls did a killer job.” Code Walk began playing together in 2012 and consists of friends Søren Gregersen and Jesper Nørbæk. The hotly tipped newcomers, backed heavily by the Scandinavian music scene, have also won support from BBC Radio 1’s Benji B and BBC 6 Music’s Gilles Peterson. The duo made waves in the summer of 2016 with their vibrant live act, playing prestigious festivals such as Trailerpark Festival, Musik I Lejet, Alive Festival and Distortion, along with a Parallel Lines hosted event at Corsica Studios in October. Live plans this year include By: Larm Festival, Oslo in March 2017.

Smerz, comprised of Henriette and Catharina, have also been turning the heads of key publications this year such as DIY, i-D, and Gorilla vs Bear. In a similar fashion to their hit single ‘Because’, ‘Guess What’ demonstrates a striking ability to meld feminine melodies with hard-hitting production. The girls explain, “We were working on some vocals and lyrics for our track ‘Because’, so the attitude and vocals we did for ‘Guess What’ ended up quite similar”. ‘Guess What’ is the first single from Code Walk’s yet to be titled debut EP, set for release in spring 2017. Judging by the already strong support from key tastemakers such as Rinse FM, BBC Radio and Radar Radio’s Matthew Smith; who included the Code Walk in his ‘Top tips for 2017’, it looks like it’s going to be a huge year for both Scandinavian duos.