If you listen to Smooth Jazz / instrumental music, chances are, you have heard keyboardist Chris Geith. His music has been among the most streamed / downloaded on the first generation MP3.com website with a whopping 1,400,000 + downloads. Chris began playing piano at the age of six. Starting with classical, moved into Jazz later graduating from the “Manhattan School of Music” with a masters degree and “advance standing” for his musical skills. Chris was awarded the “20th Anniversary Keyboard Competition” prize by Keyboard magazine for his composition “Sunrise Hunter”. Chris Geith’s unique sound, and ability to communicate through music, currently attracts thousands of new visitors every week to his websites, with over 157,000 fans online between Facebook, Myspace and Twitter, creating an extensive network of fans worldwide. His albums “Island Of A Thousand Dreams” and “Timeless World” have been top 10 best selling Smooth Jazz albums for months on CDBaby (One of the largest independent music stores online). Geith’s music can be heard extensively on hundreds of Smooth Jazz radio stations worldwide, also on the “Weather Channel”, “Music Choice” cable, satellite radio, and on a number of different national TV shows including VH1 – Behind The Music, Inside Fame, PBS – Hometime, Discovery Health – Berman & Berman For Women Only, Speed Channel – Autoline Detroit, My Classic Car, Animal Planet – That’s My Baby, Super Station – Famous Homes & Hideaways and on TV and radio commercials for clients like Toyota, IBM, Supermodel.com and many more. Some of his licensing deals have been with “Universal Music” as part of the latest “Weather Channel CD II”, and “Top2 Music” in Singapore. His song “Restless Heart” is featured on the “The Best Of The Weather Channel II” CD along with tunes by the “Rippingtons”, “Jeff Lorber”, “Spyro Gyra” and many more.

The Chris Geith Group has traveled to Europe to perform at international jazz festivals including the Veneto Jazz Festival and the Euromeet Festival. The group has also appeared at the Seabreeze Jazz Festival in Panama City, Florida, the Bahamas Jazz Festival, Jazz in the Woods, KS, the Vienna Jazz Festival, WV, and the Branford Jazz Series in Connecticut. Chris has shared the stage with celebrities such as Paul Anka, Joe Piscopo, and has performed at high profile events entertaining super stars like Julie Andrews. He has also appeared live on C-NBC, the Apollo Theatre, Birland, the Four Seasons, the Waldorf, the Yale Club in New York City, Fenway Park in Boston, the Shubert Theatre, the Palace Theatre, the Foxwoods Resort Casino, the Mohegan Sun Casino, Toad’s Place in Connecticut, Trumpets in New Jersey and many more venues. 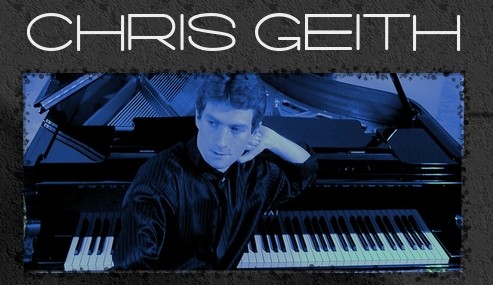