S-Line Entertainment and Lalela Records recording artist Chinkie Brown’s career began with a leap of faith. At just 20 years-old, Chinkie Brown aka Shanelle Brown, whose mother and father are both pastors, left her home in Baltimore and moved to Atlanta to pursue a career in the arts. Although her parents didn’t support her goal to become a professional singer, Chinkie Brown was determined to realize her dream. Now, with her first single Wonderland spinning on radio across the country, Chinkie Brown is confident she’s made all the right moves. After dropping out of Morgan State in 2003 to focus on singing and song writing, Chinkie Brown packed up her life in Maryland and moved outside of Atlanta, Georgia. Although she was raised in the church, Chinkie Brown never sang in any choir. The only experience she had singing before moving to Atlanta was hanging out on Baltimore’s Federal Hill as a teenager, where kids would meet up for impromptu freestyle sessions. Federal Hill is an actual man-made hill overlooking the city, it’s really inspirational, says Chinkie Brown of her former breeding ground. A whole bunch of us used to go up there and just have a good time rapping and singing. Eventually it just grew into something I really loved. I started writing and realized it was something I wanted to do. Chinkie Brown also realized she was an extremely gifted songwriter. Shortly after relocating to Georgia, she invested $100 into two hours of studio time and recorded a demo. Her demo was ultimately passed to Kevin Clark who owned a high profile recording studio in Atlanta. Kevin was so impressed with Chinkie Brown raw talent that he decided to sign her to his newly formed label S- Line Entertainment in March of 2007. When I first went to the studio, Kevin had all the heavy hitters out of Atlanta in there, remembers Chinkie Brown. We really don’t have a lot of people coming out of Baltimore; so to see that and to see who he knew and got respect from them made me respect everything he said.

For the next four months, Chinkie Brown spent every waking hour in the studio, listening to and recording new tracks. With Kevin’s close industry ties, the aspiring songstress was able to sit and work with a bevy of producers. In January 2008 Chinkie Brown signed a development deal with Warner Bros. Records. During the Warner Bros. development situation Chinkie Brown strengthened her vocals and dance moves to become a multifaceted performer. Kevin began to book shows for Chinkie Brown all around Atlanta to build a fan base and to gain recognition for her raw undeniable talents. It all happened a lot faster than I expected it to, says Chinkie Brown. Chinkie Brown’s first single Wonderland perfectly demonstrates her genre bending style with the song’s wailing electric guitar rift that weaves its way through her rhythmic tales of young love and is featured on her mixed CD “Under The Influence of Ms. Brown” hosted by DJ Don Cannon. “Gotcha” boasts Chinkie Brown’s sassy, singsong style as she jokes, I’m sorry y’all; please don’t mind me/This cognac got me cocky like I’m Kanye. Then Chinkie Brown’s strips away all of the fun and games for “You’re The World”; where the multi-talented songwriter lets down her guard. She illustrates a level of vulnerability that is rarely seen in Urban Pop music today. “Under the Influence of Ms. Brown” is a great reflection of her enormous versatility of hip-hop and R&B, topped with her rambunctious spirit. Chinkie Brown’s Urban Pop influenced style is accented with a Southern swag and is surely to connect with a diverse audience. It’s not often that a soul singer cites both Lil’ Wayne and European rockers the Arctic Monkeys amongst her strongest musical influences. I’m somebody that’s not cookie cutter, she says. You could be on track three and get an R&B vibe and then go to the next track and be rocked out. I bring me to the table, my life and my words. I’m crazier than a bed bug and I’m a little off, but there ain’t no other. No matter how varied her music, the sheer force of Chinkie Brown ambition is convincing, and her brilliant message will soon enough reach to the masses. There’s nothing you can say that somebody else hasn’t been through, is going through, or will go through, she says. In summer 2011 Chinkie Brown caught the eye of Lalela Records, after listening to her music and watching her fun personality, the owner of Lalela Records had no choice but to be part of the team. Lalela Records in collaboration with S-Line entertainment is currently working on releasing a smashing Single and an Album for Chinkie Brown. Chinkie Brown is currently signed under Lalela Records and S-Line Entertainment. With two heavy hitters on her side, the sky is the limit for Chinke Brown. 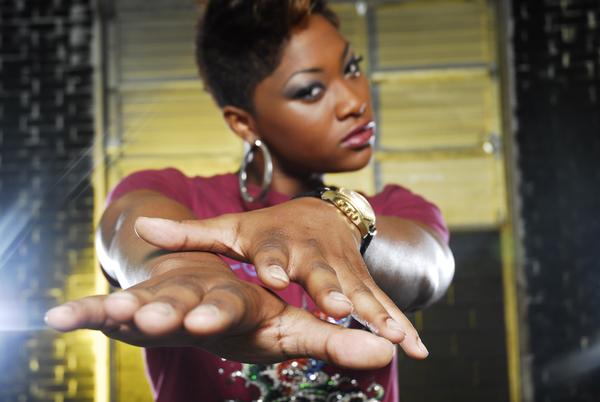