Childcare finished 2016 playing their biggest shows to date – in front of thousands as part of Bastille’s nationwide arena tour. This came hot on the heels of the band releasing killer single ‘Film Club’ to comprehensive acclaim. ‘Film Club’ was the first taster of a new EP that also features the stellar ‘Kiss?’ and represents an emphatic statement sure to cement the adoration of all those newly turned on to the London quartet courtesy of that tour. 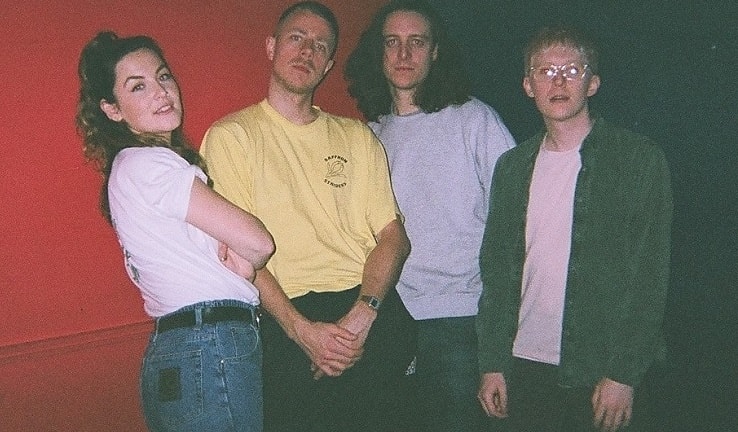 It all started when Ed Cares, one of west London’s most in-demand male nannies, was overheard humming a song he had written, by Katie, aged six, who persuaded him to form a band. Josh, eight, boldly proclaimed: “You’re probably my second favourite artist after Katy Perry.” And so, after sourcing some neighbourhood musicians capable of living up to Josh’s heady billing — specifically Emma Topolski (bass), Rich Legate (guitar) and Glyn Daniels (drums) — Ed soon had an able band to perform with under the only logical moniker in the circumstances: CHILDCARE. Having honed their vivid and visceral live show on stages including Reading and Leeds festivals and now some of the land’s major concert venues, CHILDCARE have so far released ‘Kiss?’ and ‘Film Club’ from their new EP ‘Made Simple’, with both tracks earning extensive national radio play and enthusiastic coverage from key online tastemakers.

A riff on the End of Days itself, ‘Dust’ finds CHILDCARE tackling mankind’s inevitable extinction with haunting vocal melodies, scalding guitar work and gutsy rhythms, plus a choral finale courtesy of a choir of heaven-sent angels. The third track to be shared from the ‘Made Simple’ EP, the song’s subject matter is certainly a departure from the band’s acclaimed previous tracks ‘Film Club’ and ‘Kiss?’, as frontman Ed Cares explains: “Having released some music about kissing mums and fancying a girl, I thought it only appropriate that we now tackled the impending end of the world in a global warming/nuclear strike scenario. ‘Dust’ describes a roasting high-temperature cooking experience and the final thoughts of a man approaching his maker.”