Chela, Chela, a little bit yella, she aint no fella’. Ladies and gentleman there is a new oriental disco heathen goddess on the block. She may be the first come to think of it. Chela is the latest and greatest one man woman to emerge from the bleak, black backstreets of Armadale, Wadonga. Following a short but successful career in 10 pin bowling, Chela had become accustomed to the ‘post strike shuffle’ – 2 feet moving as one, symmetrical, yet in contrary motion, these little beauties had a lifestyle of their own. But it was time to dance to a new tune, a tune of the musical variety. Chela locked herself in a dungeon for 40 days and 40 nights and then 2 more nightless days. Without human contact, any food or water, Chela took an introspective journey into the depths of her soul, summoning the spirit of Dionysus and concocting some spell binding plainsong; music to tame dragons and seduce unicorns. Unfortunately the whole medieval vibe was poorly received, and Chela needed a plan B if she was going to be a hit with the kids! Besides she missed shaking a limb or three. It was time for some stonking synth-pop infused smash hits! Chela collaborated with Ben Ely (Regurgitator) to produce ‘Plastic Gun’, and LeBruce for ‘Full Moon’. Chela has also featured on Goldroom’s summer anthem ‘Fifteen’ and more recently Clubfeet’s newest single ‘Heartbreak’. Shit started to get real! The tribal council had spoken and the buzz was brewing. With recent airplay on Triple J and exciting imminent live shows in the works it is no surprise that the whisper on everyone’s lips is ‘Chela’. Even homeless people are raving about her, unless he just asked for a ‘dollar’ come to think of it, hmm. – Luke Benge. 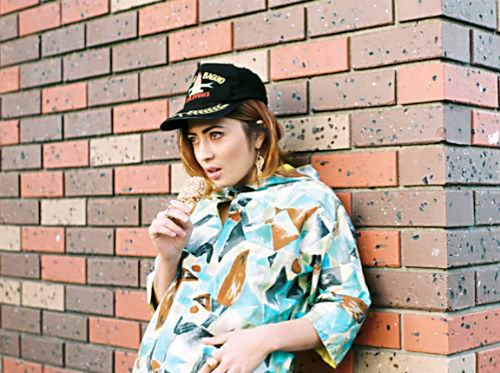