Born Ruffians are a Canadian indie rock band formed in 2004, originally from Midland, Ontario, located near Georgian Bay. They are currently signed to Warp Records and Paper Bag Records. The members are Luke Lalonde (guitar/vocals), Mitch Derosier (bass), Andy Lloyd (guitar/keyboard) and Adam Hindle (drums). The band moved from Midland to Toronto in 2004. After some local performances and a growing online reputation, the band was signed to the UK electronic music label Warp Records. They released their self-titled debut EP in 2006. It was recorded by Ryan Mills at Little King Studio (now Sleepytown Sound). They have received extensive airplay on CBC Radio 3 with their debut single, “This Sentence Will Ruin/Save Your Life,” as well as a cover of Grizzly Bear’s single “Knife” which the band recorded live on KEXP. In 2007, they released the single “Hummingbird,” which was included on their first album Red, Yellow & Blue. Wikipedia®. 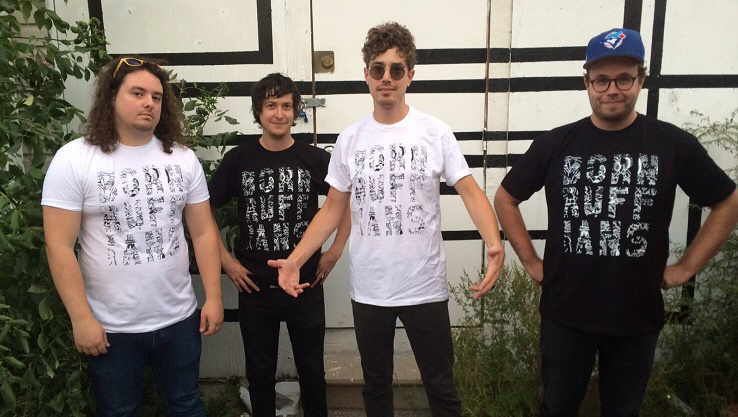 They have toured with Franz Ferdinand, Caribou, Peter Bjorn and John, Hot Chip, The Hidden Cameras, Tokyo Police Club (with whom they have also performed songs on stage) and The Honorary Title. They toured Canada (mostly Ontario) throughout April 2008, completing the North American leg of their tour on April 26, 2008, with an album release party at Lee’s Palace in Toronto. In May and June 2008, they finished their UK tour and continued touring throughout Europe. They appeared in the British teen drama Skins, playing “Hummingbird” in a Brooklyn night club. The song is also featured in a television advert in the UK for Orange mobile telecommunications’ “Animal” campaign. “Hummingbird” is also featured in a car advertisement in Australia. The band was featured in episode seven of the comedic web series, Nirvana the Band the Show, playing as themselves as they rehearse with a new member of the band. On July 31, 2009 the Born Ruffians played for Nirvana the Band at The Rivoli for the wrap of their web-series. Footage of this show will be included in episode ten.