“BioShock Infinite” is a first-person shooter video game developed by Irrational Games, and published by 2K Games. Previously known as “Project Icarus” in development, it was released worldwide on the Microsoft Windows, PlayStation 3, and Xbox 360 platforms on March 26, 2013. BioShock Infinite is the third installment in the BioShock series, and though it is not part of the storyline of previous BioShock games, it does feature similar gameplay concepts and themes. The game’s concept and setting were developed by Irrational’s creative lead, Ken Levine, who took inspiration from both historical events at the turn of the 20th century, as well as more recent ones at the time such as the “Occupy” protests. The player controls Booker throughout the game, eventually working with the AI-controlled Elizabeth. Like previous BioShock games, the player uses a combination of weapons, gear, and psychokinetic powers granted through vigors. Elizabeth’s powers can also be used to help fight hostile forces. In contrast to the limited spaces of the underwater city of Rapture, the open-air city of Columbia provides for more combat challenges, including combat that takes place aboard the city’s Skyline rollercoaster-like rail system. The game also features an optional “1999 Mode”, harking back to games like System Shock 2 where decisions made by the player have a more permanent impact on the game. BioShock Infinite won numerous pre-release awards for its display at E3 2011, including “Best of Show” from the Game Critics Awards. Upon release, the game received critical acclaim and was favorably compared to, with some even considering it had surpassed, the original BioShock game. The game’s plot and visual aesthetics were particularly praised (with its ending sparking debates across internet forums), while the combat received a divided response with some praising its new additions and others criticizing its simplicity. Its themes of political and religious beliefs, and the use of excessively violent imagery have also raised controversy. Take Two has reported that over 3.7 million retail copies have shipped within the first two months of the game’s release. Wikipedia®. 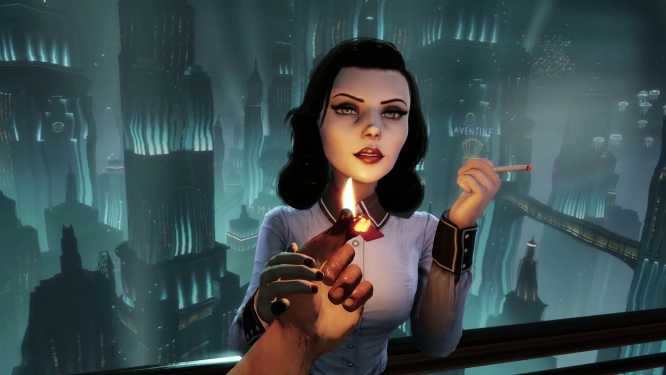 Welcome to the city of Columbia. Floating amongst the clouds, cruising far above sea level, this is a place unlike any you’ve ever seen. Please enjoy your voyage… The third game in the popular Bioshock series, BioShock Infinite breaks away from the underwater setting of the first two games to take players into a floating city held aloft by dirigibles. The game is set in 1912. You play as Booker DeWitt, a disgraced former private detective who’s picked up a new case. Your goal is to find Elizabeth, a young woman who’s gone missing and return her unharmed. The only problem is that she’s being kept on this flying city. Columbia was once a symbol of America’s success as a nation, floating around the world as a traveling World’s Fair, a marvel of human innovation. But strange things have happened since Columbia’s unveiling in 1900, and now the city has disappeared into the clouds. DeWitt knows how to find it, but over the years stories have been told about Columbia having unlawful heavy armament and deranged citizenry. Do not expect this to be a pleasure cruise.