Skip to content
Home » Music » Beatsteaks – Gentleman Of The Year

Beatsteaks are a punk rock band from Berlin, Germany. Peter Baumann, Stefan Hircher, Alexander Rosswaag and Bernd Kurtzke founded Beatsteaks in 1995. Shortly afterwards, Arnim Teutoburg-Weiß joined the band as singer and additional guitarist. In 1996, the band won a local music competition in SO36 and played as opening act for the Sex Pistols at a concert in Berlin. This was also the band’s tenth live performance. In 1997, the band recorded their first album 48/49, named after the number of their rehearsal space. It contains several songs in German, while the more recent albums are in English. In 1999 they released their second album, Launched, on the American punk label Epitaph Records. Thomas Götz had joined the band on drums, while on bass, Torsten Scholz replaced Alexander in 2000. This was followed by tours with Bad Religion, Die Ärzte and Die Toten Hosen, bringing the band to a wider audience. In 2002, they released their third album Living Targets. From this album, Beatsteaks released their first two singles Let Me In and Summer. At the end of 2002, the band played a concert at the Columbiahalle in Berlin and recorded an EP “Wohnzimmer”. Ticket holders for the Berlin concert each received a ‘free’ copy of the EP. “Die Ärzte” mention The Beatsteaks in their 2003 song Unrockbar, which brought Beatsteaks increased attention: “How can you sit still to the Beatsteaks, when schlager singers bring you to tears?” (“Wie kannst du bei den Beatsteaks ruhig sitzen bleiben, wenn dir Schlagersänger Tränen in die Augen treiben?”) Their breakthrough was achieved in Berlin in 2004 with the album Smack Smash, and particularly with the second single I Don’t Care As Long As You Sing with which they won the MTV European Music Awards 2004 in the category Best German Act. At the end of 2005, they released the double-DVD B-Seite, which included a self-produced documentary on the band’s history, a compilation of several concerts and music videos of the band up to this time. Wikipedia®.

Beatsteaks – Gentleman Of The Year Lyrics: 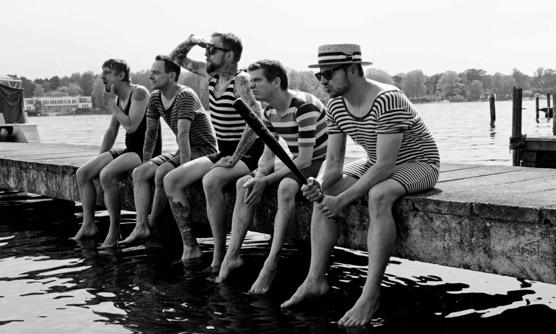