Battlefield 4 is coming to Next Gen!

Check out this screenshot for an early look at the next generation Frostbite 3 engine at work! 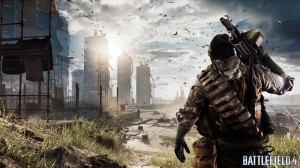 Battlefield 4 is a 2013 first-person shooter video game developed by Swedish video game developer EA Digital Illusions CE (DICE) and published by Electronic Arts. It is a sequel to 2011’s Battlefield 3 and was released on October 29, 2013 in North America, October 31, 2013 in Australia, November 1, 2013 in Europe and New Zealand and November 7, 2013 in Japan for Microsoft Windows, PlayStation 3, PlayStation 4, Xbox 360 and Xbox One. Battlefield 4 was met with positive reception. It was praised for its multiplayer mode, gameplay and graphics, but was also criticized for its short and shallow single-player campaign mode, and for its numerous bugs and glitches. It was a commercial success, selling over 7 million copies.