Southern California rock band Bad Suns formed in 2012 and in the short time since inception, have managed to be musically beyond their years. Made up of Christo Bowman (vocals), Gavin Bennett (bass), Miles Morris (drums) and Ray Libby (guitar) the four piece ranges from ages 19-22 yet has a sound reminiscent of rock stalwarts from generations past. “I grew up with a lot of world music playing in the house. When I was 10, I started getting heavily interested in the guitar, and my dad began introducing me to his records from the 70’s and the 80’s. Initially Elvis Costello, then to The Clash, The Cure, and so on,” notes Christo. “All of these artists and bands had a big impact on me, at a young age, as far as song composition goes. “ Influences are apparent on the band’s upcoming EP Transpose, where angst-ridden riffs and ethereal yet charismatic vocals pay tribute to post-punk legends of the early 80’s. “ I started writing my first songs at that time,” Christo continues, “Though we can now reflect on that era of music, those artists were ahead of their time in a lot of ways. That’s what’s most inspiring.”
Bad Suns – Cardiac Arrest

Transpose was recorded in the studio with producer Eric Palmquist (The Mars Volta, Wavves, Trash Talk) and serves as a prelude to the band’s debut full-length slated for 2014. “The writing and recording process is always exciting, because it’s constantly changing and unique to each song. Inspiration comes and goes as it pleases, so a night when a song gets written is a very good night,” says Christo. Comprised of four tracks, Transpose flows effortlessly from start to finish showcasing the band’s stadium ready anthems and undeniably catchy hooks. “Music has the ability to evoke certain feelings in people, a way that not much else can. The pairing of words and sounds can be an extremely powerful tool, when done right. I think the ultimate goal for this band is to make music that causes people to really feel something.” Aside from writing a record, Bad Suns’ 2013 was a busy one, complete with multiple CMJ showcases as well as sharing the stage with the likes of The 1975 and Vaccines with no signs of slowing down any time soon. Transpose will be released everywhere in the early months of 2014.

Bad Suns – Cardiac Arrest Lyrics:
I’ve been trying to keep my grip, yeah I think I’m over this
I can hear it now, oh no
Yeah, my tongue, I’ll let it slip. Why’d I do those things I did?
I can taste it now, oh no

My innards turn, your eyes, they roll. I’ll be there to take the fall
I can feel it now, oh no
Same old story since day one, but I’ve got no place to run
I can see it now, oh no

High voltage in her lips, they catch me when I slip. 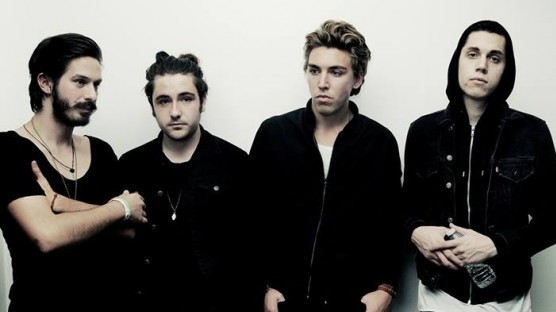