MOJO-supported trip-hop enigma Aphty Khea is proud to present her new self-titled EP via The Sound Of Everything UK on 8th July. Made up of dark and brooding shades of experimental and electro-pop, the release is the cosmic character’s most eccentric and lush to date. Hypnotic, intense and beautifully iridescent, both tracks are designed to soak your mind into a complete state of abstractness and sensuality. Inspired by the difficulty of not losing oneself in moments that might bear consequence on one’s psyche, ‘Onyx Glitz’ offers a window into the dark and twisted realms of psych-pop and trip-hop, characterised by battered synths and clasping percussion. In contrast, the much mellower ‘Peacebloom’ – which for Aphty reflects the infectious nature of love and kindness – calls to mind the sensuous R&B melodies of BANKS. Neatly lashed together, both tracks complement one another in their varying styles, and shed some light on the mysterious, alien-like entity that is Aphty Khea. 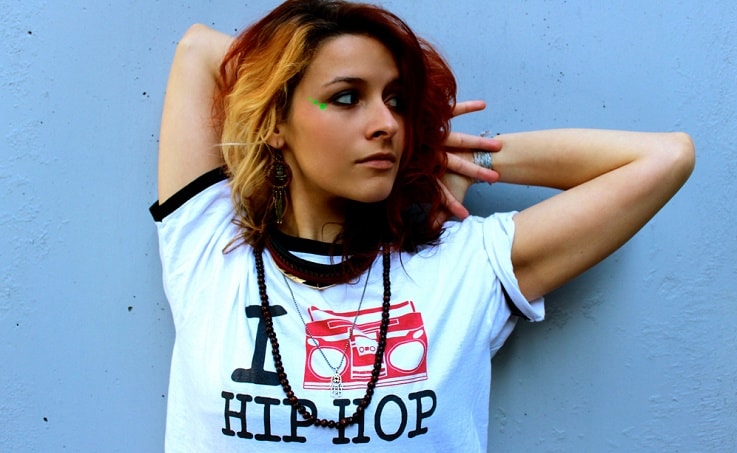 While on a daring quest of self-enlightenment, Khea descends from her starship Peacebloom as an outsider looking in on a world marked by banality. Armed with a visual mix of art and music, she is a “sonic healer” in the form of a chameleon humanoid – reflected through the vivid body paint seen in the EP’s accompanying video – who stumbles upon Earth from a parallel galaxy to find the planet gripped by omnipresent staleness; poisoned by a myopic perspective and destructive world view, and makes it her mission to breathe life into it. Characterised by a unique and ornamental aesthetic, she is known by her fans for delivering blissfully mesmerising live performances, which she will next showcase with an EP launch on 28th June at The Waiting Room. Much more than just an artist, she is a spectacle of inventiveness and obscurity.

Constructed through her love of trip-hop and abstract hip-hop, Khea’s latest offering is the result of a number of influences. Citing artists like J Dilla and Hiatus Kaiyote as two reference points to her music, alongside the avant-garde stylings of Björk and FKA Twigs, Khea’s new release not only captures an essence of eccentricity, but a keen sense of intrigue and subtlety as well. Eclectic, invocative and provocative, ‘Aphty Khea’ EP is every bit as captivating as its creator. Comprised of an array of post-modern and experimental styles, it forms a daring deluge into the unknown entity that is Aphty Khea; as inspired a musical persona as you are ever likely to meet.