Anybody remember Smith’s version of “Baby, It’s You”? That kinda describes Perley’s voice. Hard hitting, rock ‘n’ roll, dirty, sexy, like Ann Wilson from Heart. This Columbus, Ohio-based group blends alternative country sound with shades of old-school rock. Perley’s four-piece band features longtime friends Billy Zehnal and Chris Connor, on bass and lead guitar, and a stable of drummers, rotating in and out when the group is on the road. There is plenty of things to love about this band: Perley’s voice, the way the band kicks, the production. I love this band. One day, I want to see them live. Come on, guys, I’m in Pittsburgh. Play a show here. There is something so different about Angela Perley & The Howlin’ Moons. Listen to them. You’re gonna love ’em. 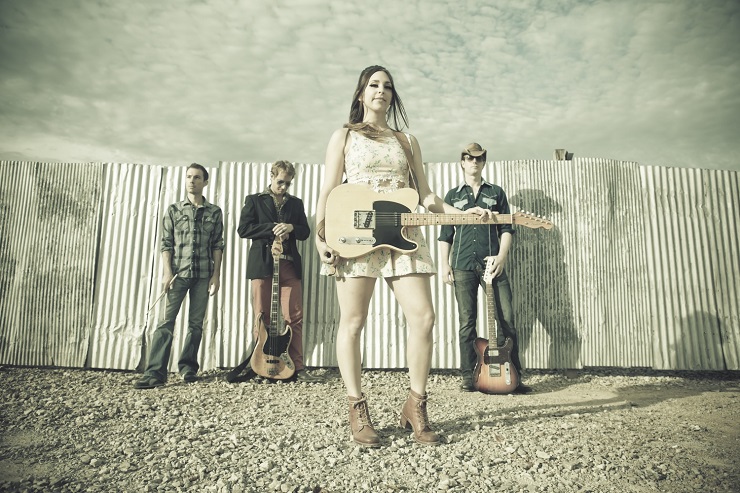 There is something magnetic, vulnerable, dangerous, and electric about Angela Perley that has been causing a lot of buzz around the artist and her band The Howlin’ Moons lately. Demure and quiet off stage, the performer usually shocks people when she tells them she is the lead singer in a band. “Putting on a show is my way of being heard, I guess,” says Perley. Growing up in small town Ohio, Perley spent years as an observant wallflower engrossing herself in poetry, literature, people, and films. “I am a storyteller at heart, always have been. I get a lot of inspiration from relationships, surroundings, poetry, and old movies. Music for me is a way to express feelings I can’t get out any other way, and when I hit the stage with the band I can turn up and let go.”

Perley’s band features longtime friends Billy Zehnal and Chris Connor on bass and lead guitar and Jeff Martin on drums. Since their incarnation in 2009, the band has released four EPs (Black Cat, Yellow Moon, Fireside, and Nowhere is Now Here) and one album (Hey Kid) on Vital Music USA. The group’s latest release and debut album, Hey Kid (Jan 2014), has been catching praise in the U.S. and the UK from tastemakers including American Songwriter Magazine, Magnet Magazine, PopDose, Americana UK, Twang Nation and more and has been gaining steady grassroots radio play in both the U.S. and Europe. The group’s explosive single, “Hurricane” was featured on ABC during the USC vs. UCLA football game in November and their new record reached number six on the EuroAmericana charts in March of 2014.

Perley has earned comparisons to everyone from Joan Jett to Patsy Cline and her range of delicate reverb-laden crooners to grit- fused rock anthems have made more and more listeners take notice. The band’s live shows rumble with swaggering basslines and guitar riffs and Perley’s soulful delivery and charismatic stage presence create a memorable experience for audiences eager to listen