Alexia Coley is a girl who has been preparing her whole life for what 2014 has to offer. Her background as a big band jazz singer and then as lead singer for West London crew The Rotten Hill Gang has prepared her for the big stage and when opportunity knocks she always answers. Although she has played to tens of thousands of people while fronting other peoples bands it was only when she won the Big Chill Festival competition for a chance to play the huge Revellers stage at the festival that she started to become widely known for her solo work. Plenty of industry figures saw her show that day and as soon as she came off stage she was asked to play an impromptu second set in the backstage VIP. The Jalapeno Records crew were in the audience that day and started a pursuit of her signature that lasted over a year. 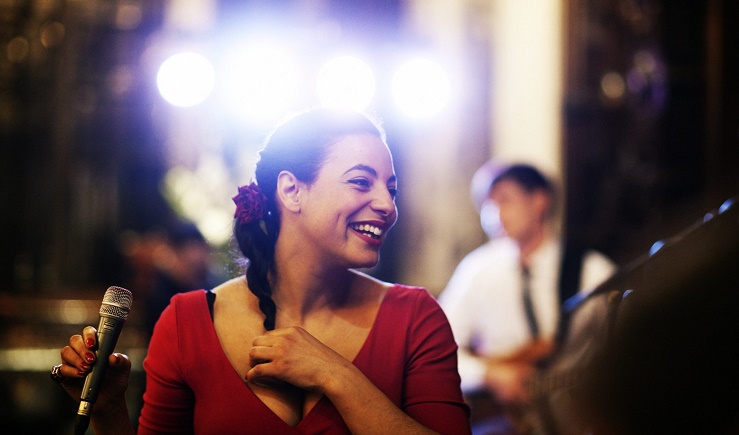 Although her future label only discovered her that day, you could ask anyone in the West London live music scene and they all would know exactly who she was. Whether playing resident gigs at The Paradise and Mau Mau, wowing huge crowds at Notting Hill Carnival as part of Gaz’s Rockin’ Blues sound system or fronting shows for Rotten Hill gang alongside The Clash’s Mick Jones – when people saw Alexia sing they remembered it. Her music has a classic soul and jazz vibe but with the edge of a girl who has grown up round Ladbroke Grove and seen what effect modern day London has on people. Her songs are timeless but still relate to kids growing up right now and she can just as often be found sandwiched between a rapper and a DJ on the bill as a line-up of jazz players at Ronnie Scotts. Her voice is one that could rank among the greats with songs that are a mixture of uplifting good time soul and slow emotive torch songs delivered with a style that comes from having a family with show business in the blood – her mother Ethel Coley having been a famous stage performer in her day. When Alexia plays live with her band you can see a light come on as she walks on stage. She knows it is exactly where she is supposed to be and that now is her time. Her band are tight – a crack crew of young musicians who are excited to play and be part of the phenomenon that is happening right before their eyes. Her track Keep the Faith got its first national airplay last month supported by Craig Charles on his funk and soul show but it’s clear this is just the beginning. With her album nearly recorded expect 2014 and her live diary filling up expect Alexia Coley to emerge as one of the UK’s leading soul stars.

Alexia Coley comes swinging into 2015 with the upbeat floor mover “Something’s Going Down” from her debut album “Keep the Faith”. Having built up a keen following in the UK and Europe with a string of limited edition 7” releases her debut album has continued to delight fans of her twisted vintage sound. “Something’s Going Down” is the tale of a girl realising she might have finally found a good man before finding out that he’s still into his ex. Alexia turns this age old story into a dancefloor smash with her amazing band providing the swing to go with her soul.