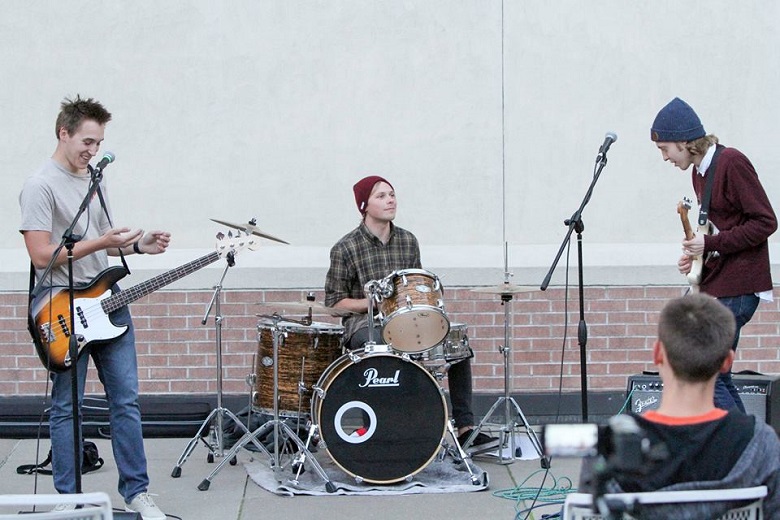 Hailing from Minneapolis, Minnesota, this three piece has plenty of experience when it comes to playing music. Heavily influenced by pop punk giants Blink-182, guitarist Adam Baumann and bassist Eric Wigham formed their very first punk band, “No Pun Intended” in 2009. After several line up changes, the band dismantled and Eric formed a new band, “Take the Hint”, from the remains. Upon losing the drummer of TTH, Eric recruited drummer Jordan Narloch. Again, after years of playing together, the band dismantled. Both of the bands had specialized in cover songs, but towards the end of TTH’s career, they had began writing songs as well.
Jordan and Adam had been scheming for some time to form a band together over their mutual love of Death Cab for Cutie amongst other bands. Now that the opportunity had presented itself, the two decided it was finally time to pursue the project. They realized pretty quickly that a two piece was a difficult arrangement, so after some thought, they recruited mutual friend Eric to join the band. Then known as “No Action”, The Aftergreens officially formed in 2014.
The following years presented many challenges, each member graduated high school, Jordan went off to college and Eric moved to Minneapolis. Although the busy schedules, the members still managed to find time to hang out and scheme about music. They established a style that is best described as indie/emo surf rock, influenced by bands such as The Vaccines, Modern Baseball, and Death Cab for Cutie. The band strives to write engaging, thought provoking lyrics hidden behind a wall of catchy instrumentation so that the music can be enjoyed at face value, but can also be analyzed on a deeper level.
Fast forward to 2017, the pressure was on to perform and get the name out there. Up until this time, the band mainly focused on writing and finishing songs that Adam had written in his free time. The catalogue was very large, and the band needed to record and distribute the music. Finally in October 2017, the band self-released their debut EP, A Portion of an Empty Promise EP, consisting of 7 acoustic tracks. Shortly after in November, they, again, self-released their single, “I can hear my light.”, featuring 3 songs, totaling 7 minutes, and included a full band line up this time.
Since the release of their two EPs, the band has been busy booking house shows and local bars and venues to expand their fan base. They are also working on a full length album featuring many non-recorded songs that are favorites live, and a collection of new songs as well.
https://www.facebook.com/TheAftergreens/