Bonded not only by blood but a taste for finding humour in the macabre, Patrick and Tom Malone are brothers whose sibling intuition extends to a penchant for songs as melodic as they are bizarre. Cut-throat guitars, dirty basslines and contorted synthesisers are their tools as the brothers pen hook-filled numbers with strange, poetic lyrics, often influenced by the stark realism in the wordplay of Patrick’s heroes Leonard Cohen and Charles Bukowski. 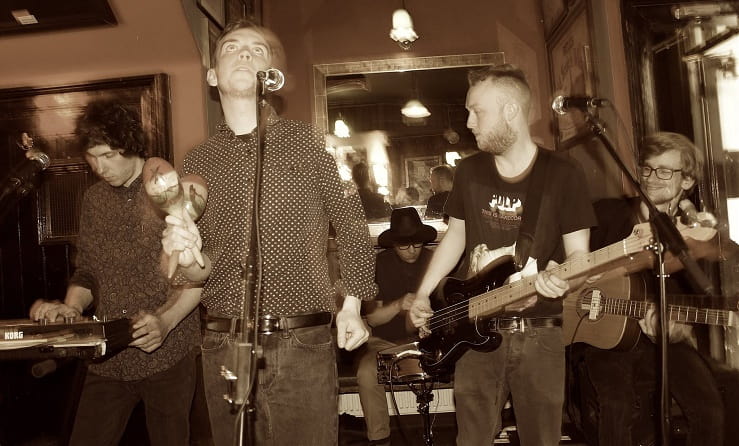 This bold, thought-provoking prose is set to a musical backdrop of exhilarating wall-of-sound pop and primitive punk energy, unleashed by Patrick on guitar/vocals and Tom on bass/vocals respectively, with the aid of Steve Wraight (vocals/percussion) and Dan Robershaw (guitar). The Reading band have performed their adventurous, singularly intense live shows on the same bill as Fat White Family, The Zombies and The Correspondents, and garnered resounding praise for their blistering debut single, ‘Hanging Tree’, taken from their first long-player, Through Snow and
Small Talk, to be released on the band’s own DIY Freak Power label in the autumn of 2017. It’s an album fizzing with ideas and energy, capturing Adam & Elvis in all their irreverent, witty and experimental glory, the sound of a group that have come of age and are proving as hard to pigeonhole as they are to ignore.

For a song that deals with life’s limited duration and how the knowledge of which impacts on the human condition, ‘Wasting Away’ is a remarkably upbeat tune. From the off, an angelic baroque-pop prelude segues into a joyous indie shuffle that’s embellished further by shimmering harmonics. Patrick Malone’s lyrics pull no punches, right from the opening couplet: “Don’t buy into Jesus Christ/There’s no such thing as the afterlife”. What follows is an impassioned declaration that we only live once, so we should damn well make the most of it. And, hey, that is an upbeat message when you think about it, and one that perfectly chimes with the rapturous melodies of ‘Wasting Away’.