Skip to content
Home » Music » 10 O’Clock Chemical: We Are Digital

Having met through Stoke On Trent’s local music scene, 10 O’Clock Chemical was formed in 2016 between four friends discovering a shared love for rock and electronica: songwriter, keyboardist and vocalist Rhys, drummer Danny, bassist Josh, and guitarist Jack. An enigmatic group with a penchant for sci-fi imagery and witty, observational songwriting, they were quickly voted ‘Best New Artist’ by six hundred of their peers at the Staffordshire and Cheshire Music Awards in Spring 2017. Their debut single ‘Babylon is Fallen’ was released to critical acclaim in February 2018 via their own GRITPOP label, and the group plan to release their debut EP this June. Currently, they’re on tour peddling their dystopian brand of spiky electronica around the UK with dates posted and updated via their social media channels. In addition to their core lineup is a mysterious cyber entity called Zed, who carries administrative duties for the band and even makes the odd cameo appearance. 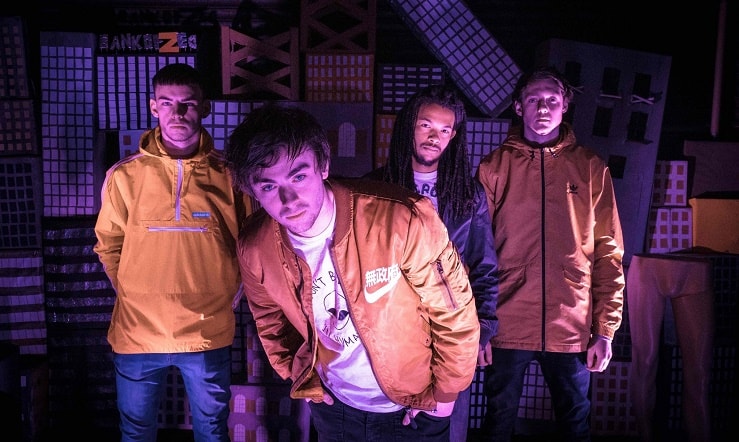 ‘The title is self explanatory – it’s the transition to the digital era. It’s also about alienation, confessing our drug-like addiction to social media and serving our online avatars for pseudo-approval instead of making real life connection and conversation. Everything is filtered and more of us than ever before are guilty of neglecting relationships and human experience for touch screen talking and computerized entertainment; the virtual harbours aimed at making us happier are making us more alone.’

10 O’Clock Chemical: We Are Digital

On ’We Are Digital’ 10 O’Clock Chemical deftly channel the anxieties of digital hyper-connectivity into a concise display of hook-laden electro pop perfection. With its direct riffing and skittering percussion its very infectiousness could be read as a comment on the narcotising allure of self validation that social media us brings through pseudo interactions. Despite the glistening pop surface, there’s a darker stylistic underbelly. Fusing funk and industrial with effortless aplomb, 10 O’Clock Chemical examine the troubling implications of our simulated lives and vicarious experiences. With everyone caught in the same web, they ask us if mass communication has made us the ironic victims of a new and more pervasive kind of loneliness disguising itself as human interaction. It’s all delivered over three and a half minutes of the most relentless and intoxicating four-on-the-floor dance pop, making for a veritable witches brew of self-reflexive twenty-first century angst.

10 O’Clock Chemical: We Are Digital Lyrics: