10 O’Clock Chemical is the creative vision of songwriter, vocalist and multi instrumentalist Rhys Oakes, who started writing songs in his bedroom as a teenager. Deciding that 10 O’Clock Chemical should be presented as a live band, Rhys connected with local musicians Josh Barker (bass), Jack Ellis (guitars) and Danny Shaw (drums) from their home town of Stoke on Trent, connecting over a shared love for rock and electronica. In addition to their core lineup is a mysterious cyber entity called Zed, who carries administrative duties for the band and even makes the odd cameo appearance. An enigmatic group with a penchant for sci-fi imagery and witty, observational songwriting, they were quickly voted ‘Best New Artist’ by six hundred of their peers at the Staffordshire and Cheshire Music Awards in Spring 2017. The band spent the rest of 2017 refining their sound, fusing their rock based sensibility with electronic sounds to create a hybrid sound which they’ve termed “GRITPOP”, now adopted as the name for their own label. 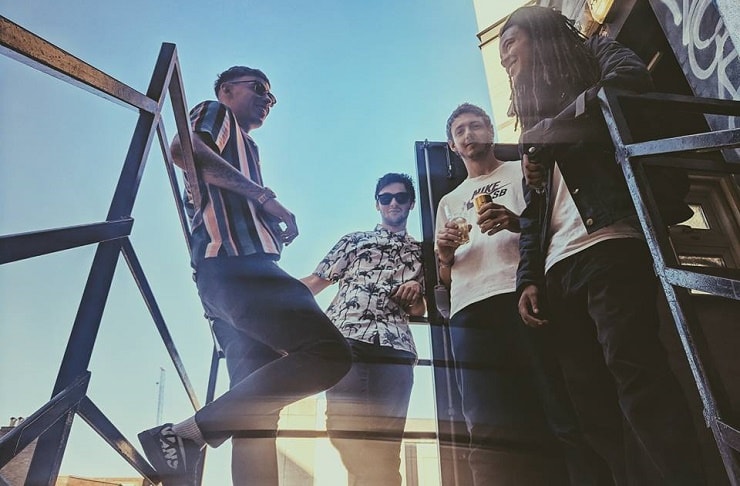 10 O’Clock Chemical’s debut single ‘Babylon is Fallen’ was released to critical acclaim in February 2018 via their own GRITPOP label. A second single, “We Are Digital” followed in April, and was crowned Record of the Week on BBC Introducing Stoke. With flattering early comparisons as broad as Kasabian, Daft Punk, the Prodigy and Muse, 10 O’Clock Chemical are releasing their debut four track EP “Favours For The Wicked” on 22nd June. The EP was produced by Matt Johnson, digital wizard, keyboard player and producer in Jamiroquai, and mixed by Adrian Bushby, a double Grammy Award winning mix engineer, who has worked with the likes of Muse and Foo Fighters. Currently, 10 O’Clock Chemical are on tour peddling their dystopian brand of spiky electronica around the UK with dates posted and updated via their social media channels.

10 O’ Clock Chemical’s debut EP Favours For The Wicked holds a mirror to the world to reveal it for the self-consuming zoo that it is. It’s a bold and bleak musical view of a planet devoured by an unforgiving consumer culture, the isolating effects of social media, aggressive surveillance, and increasing censorship. Through four fiendishly addictive songs, (an exemplary display of the irony of form echoing content), 10 O’ Clock Chemical suggest that the forces of evil are at large, and that humanity is pending a planned dehumanisation program that will inevitably lead up to the surrender of our privacy, speech and human values. One can only hope that when the beneficiaries of such a nefarious system are revealed, the social order will collapse, until then we are merely the ignorant and faceless servants of a backwards-thinking culture.

About ‘It’s War’
Starting life as an old dubstep song written by Rhys, ‘It’s War’ has been through several permutations before arriving in its final form. Inspired by Black Friday and the carnivalesque consumer spectacle that attends it, evinced in countless hours of YouTube footage, ‘It’s War’ is a song about the dehumanising consumer trance people fall under. Centred around a chillingly simple imperative (‘Work. Rage. Want. It’s War), Rhys views the spectacle through the eyes of a mogul advocating chaos for profit. It’s a rollicking new wave number with Talking Heads style grooves that distills everything the group set out to achieve on Favours For The Wicked.

About ‘We Are Digital’
Fusing funk and industrial with effortless aplomb, 10 O’Clock Chemical examine the troubling implications of our simulated lives and vicarious experiences. With everyone caught in the same web, they ask us if mass communication has made us the ironic victims of a new and more pervasive kind of loneliness disguising itself as human interaction. It’s all delivered over three and a half minutes of the most relentless and intoxicating four-on-the-floor dance pop, making for a veritable witches brew of self-reflexive twenty-first century angst.

About ‘Babylon Is Fallen’
‘Babylon is Fallen’ is about the cultural malaise that has led to a culture easy to be cynical of. With production by electronica wizard Matt Johnson (best known for his work on Jamiroquai’s latest album Automaton) and mixed by Adrian Bushby (Muse, Foo Fighters, etc) it’s as slick a debut single as any band could hope for. Restless funk elements, slippery bass grooves and a lysergic dance outro make for a profound and danceable exploration of the current and troubling state of our international media neuroses.

About Dinosaur ‘(It’s Not The 80’s)’
With it’s sleazy narcotic glam rock vibes, ‘Dinosaur (It’s Not The 80’s)’ is a satirical glance at a short-lived relationship with someone who refuses to grow up and change. Symbolic for the kind of retrotopian thinking that holds culture back in a broader sense, 10 O’ Clock Chemical’s song saunters in with a cocksure and flamboyant swagger as the group examine the minutiae of human relationships, and what they say about humanity in general.